The Next American City

The Big Promise of Our Midsize Metros

by Mick Cornett with Jayson White; Foreword by Richard Florida

Praise for The Next American City

“There’s no doubt Washington is broken. In The Next American City, Mayor Cornett lays out why many of us believe the future of America is in our mid-sized cities like Oklahoma City and New Orleans, among others. This book is for anyone in politics or public policy interested in where we are headed and how we can get beyond the Washington gridlock that too often holds our country back.”
—Mitch Landrieu, Former Mayor of New Orleans and the 2017-2018 President of the US Conference of Mayors

“‘The Next American City’ makes a serious point that we need to hear right now: innovation and bold ideas aren’t limited by geography or political affiliation. He exposes the weaknesses in the cliché about two Americas — red/blue, urban/rural, coastal/heartland — by showing how cities across the country, led by mayors of both parties, are creating inclusive communities with good jobs and a high quality of life.”
—Eric Garcetti, Mayor of Los Angeles

“Headlines from Washington dominate our social media pages and consume the nightly news, but Mayor Cornett points out the truth—that cities like Oklahoma City and Fort Worth, Texas, are leading the way for a brighter future in America. From innovation that augments fiscal responsibility, to bold leadership that isn’t afraid to cross party lines, cities are providing the commonsense leadership that our citizens deserve.”
—Betsy Price, Mayor of Fort Worth and Chairwoman Emeritus of Community Leaders of America

“Cornett and White remind us that today’s struggling community was likely yesterday’s boom town, and more importantly, could be tomorrow’s thriving innovation hub.  The history of cities is one of constant change.  Cornett and White provide practical and inspirational insights on the renaissance taking place in cities, as small as Charlottesville and as big as New York, as they discover their potential to flourish as centers of innovation and entrepreneurship.”
—Professor Michael Lenox, Chief Strategy Officer at the Darden School of Business

“Leading a city in the digital age isn’t easy: people and companies move fast, and information moves even faster. For cities working to attract talent and build a promising future, the learning curve is incredibly steep. For Midwest leaders and conservatives, this challenge is particularly hard. But Mick Cornett and dozens more in the next generation of urban American leaders are blazing a trail we can all follow. The Next American City is essential reading for the next generation of city leaders in any party, from any city.”
—Stephen Goldsmith, Daniel Paul Professor of the Practice of Government and Director of the Innovations in American Government Program at Harvard Kennedy School

“It’s clear Oklahoma City is on track to mirror the success of many Colorado cities. As a former Denver mayor and now Governor, I’ve seen Denver, Colorado Springs, Fort Collins and other cities grow from sleepy western towns jolted by booms and busts, to economic engines attracting the country’s top employers. When people love where they live and they invest in it, there’s no telling what will come. Oklahoma City has a bright future ahead.”
—Governor John Hickenlooper (State of Colorado) and Former Mayor of Denver (2003-2011)

“Cities like mine and Mick’s have an important competitive advantage as our country moves through its urban century. Midsize markets can dream big while offering great companies, new residents, and growing families the sense of community that so many of us had feared was lost. He won’t ever tell you this, but Mick Cornett’s achievements in Oklahoma City—raising the city’s standards, creating a well-known brand, and designing a place around the people that actually live there—are truly revolutionary. And though the people of OKC have changed the game, the astonishing thing is how many American metros can follow in their footsteps. If you are a Mayor—or simply care about your city—please read this book!”
—Mayor Joe Riley, Charleston Mayor from 1975-2016 and the Founder of the Mayors’ Institute on City Design

Four-term Oklahoma City Mayor Mick Cornett’s upbeat THE NEXT AMERICAN CITY examines the creative ways midsize cities around the country are reinventing themselves and reshaping the American Dream. Along the way, Cornett reveals the secrets to his own city’s rise from the depths of economic depression in the 1980s to its rebirth today as one of the nation’s most vibrant urban centers.

Named one of the country’s five most innovative mayors by Newsweek, Cornett came in at #25 on Fortune magazine’s list of the world’s 50 greatest leaders for 2018, and is currently running for Governor of Oklahoma in this year’s election.

Mayor Cornett first grabbed national headlines in 2008 when he put his city on a diet. Oklahoma City had been named “one of the fattest cities in the nation”—a ranking few mayors would publicize. But Cornett insisted that if leaders talked honestly about a problem and provided an opportunity for people to invest in themselves, real change would come. Under his initiative, city residents collectively lost more than one million pounds.

But Oklahoma City’s story isn’t just about weight loss. Cornett is also known for helping Oklahoma City attract a hugely successful NBA franchise, and for leading the charge to pass MAPS 3, an innovative $800 million investment in parks, urban transit, wellness centers, and infrastructure that dramatically reshaped Oklahoma City and enhanced the quality of life of its residents.

After decades of decline and suburban sprawl that siphoned growth from hollowed out downtowns, cities like Cornett’s have rebounded. Across the country residents are returning to midsize metros at rates far outpacing the largest U.S. cities. As mayor, Cornett used a bold, creative, and personal approach to orchestrate Oklahoma City’s renaissance from “flyover city” to final destination—a crucial and untold story of urban reinvention. Drawing on lessons learned and failures overcome, Cornett translates his city’s success into a vision for the future.

THE NEXT AMERICAN CITY outlines the trends and introduces the big ideas that have transformed the nation’s smaller cities into dynamic, inventive places for visitors and new residents alike. Cornett tells stories of urban renewal that crisscross the country, including:

Each case study further illuminates Cornett’s experiences in Oklahoma City, and sets an example for how he believes leadership can build success in communities of all kinds. With unflagging optimism, Mayor Cornett champions cities of modest size but outsized accomplishment and leads a rallying cry for a revolution of renewal that promises to change the nation’s future.

Oklahoma City Mayor Mick Cornett is the nation’s most successful Republican Mayor.  He recently completed his one-year term as President of the United States Conference of Mayors and is the longest-serving mayor among the nation’s 50 largest cities. A thoughtful leader in American politics, Cornett was named Governing Magazine’s “Public Official of the Year,” one of Newsweek’s “five most innovative mayors,” one of Politico’s 50 “thinkers, doers and visionaries transforming American politics,” and most recently on of Fortune’s 50 “World’s Greatest Leaders”.   A frequent guest on national television shows, Cornett has appeared on many programs to discuss Oklahoma and municipal issues. His TED TALK has been viewed nearly 2 million times.

The son of a postal worker and a school teacher, Mick was born and raised in Oklahoma City. As a 5th generation Oklahoman, his parents taught him early in life the value of public service and encouraged him to work hard and dream big.

After graduating from Putnam City High School and earning a journalism degree from the University of Oklahoma, he began his 20-year career in broadcast journalism, where he served as a reporter, anchor, and manager. He later earned a Masters in Business Administration from NYU.

After leaving behind his successful career in the news industry, Mick ran for Oklahoma City Council in 2001 against a two-term incumbent, winning on a platform of fiscal conservatism.

In 2004, he was elected a Mayor of Oklahoma City and has been re-elected three times.

Mick’s leadership as Mayor has been instrumental in the continued revitalization and renaissance of Oklahoma City, including bringing the NBA to Oklahoma following Hurricane Katrina in 2005. The New Orleans Hornets’ stay in Oklahoma lasted two seasons and created proof that the city and the state would support a professional sports franchise.

In 2007, Mick stood in front of the elephant exhibit at the Oklahoma City Zoo and announced This City Is Going On A Diet, raising the awareness of obesity in Oklahoma City and pledging to lead the city to collectively lose 1,000,000 pounds. In 2012, that goal was achieved.

Mick also continued the legacy of Oklahoma City mayors pushing to make capital improvements to improve the quality of life in the city through the MAPS 3 initiative.

During his tenure, Oklahoma City has invested nearly $2 billion in schools and infrastructure dedicated to improving the city’s quality of life. That investment generated nearly $6 billion in private sector investment. The city has also consistently maintained one of the lowest unemployment rates in the country.

Mick is married to Terri (Walker) Cornett and has three sons and four granddaughters, who are seventh-generation Oklahomans.

Jayson White studied philosophy at Iowa State University and international affairs at Columbia University, has launched startups in commercial real estate and urban change, and now attends the Darden School of Business in partnership with its CITEE Initiative on entrepreneurship ecosystems. 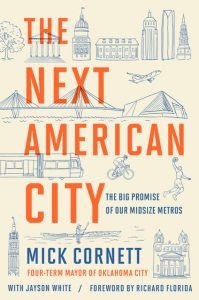