“Date-onomics is the Moneyball of dating. College-educated women wanting to improve their odds in today’s wacky marriage ‘market’ will be dog-earing its pages.”
—Jean Chatzky, NBC’s Today Show Financial Editor

“A fascinating look at romance and what’s going on with the mating rituals of homo sapiens today. This book will surprise and enlighten you.”
—AJ Jacobs, New York Times Bestselling Author

It’s not that he’s just not that into you—it’s that there’s not enough of him. Using a combination of demographics, game theory, and number crunching, financial and tech journalist Jon Birger explains America’s curiously lopsided dating and marriage market—and what every single, college-educated, heterosexual woman needs to know.

Call it the man deficit. The shortage of college-educated men is not just a big-city phenomenon frustrating women in New York and L.A. Among young college grads, there are four women for every three men nationwide, except in those pockets, like Silicon Valley, where the economy is driven by a primarily male job market. And this numbers game has wider implications. Birger shows how this unequal ratio explains the college and post-college hookup culture; the decline in marriage rates; even the seemingly paradoxical problem that the more attractive the woman is, the more difficult it can be for her to find a partner. He reaches back to explore the origins of the college gender gap—a combination of the pill, Title IX, and developmental differences between boys and girls.

Then there’s what to do about it, from what college to attend (any with strong sciences and math), to where to hang out (in New York, try a firemen’s bar), to where to live (Colorado, San Jose, Seattle), to embracing the power of the marriage ultimatum—it works.

Jon Birger is a contributor to Fortune magazine. A former senior writer at Fortune and Money, he’s an award-winning freelance journalist who has written for Time, Barron’s, and Bloomberg BusinessWeek, and has appeared on MSNBC, CNN, CNBC, National Public Radio, and Fox News. Mr. Birger lives with his family in Larchmont, New York. 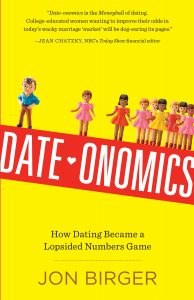