A Young American's Travels Among the Youth of the Middle East

Praise for Children of Jihad

“Children of Jihad is a very smart, insightful account of a young Jewish-American (and Rhodes Scholar) trying to understand his generation across the line in the Middle East.  A winner.”
—Tom Brokaw, NBC Universal

“This young gutsy writer knows that the East-West struggle is being fought over the cafe tables of the Near and Middle East. Do the youth of the Islamic world dream of an engineering degree from Michigan State or a martyr’s death? This young American has had the moxie to sit and listen for hours at those tables. In the words of the poet, Jared Cohen has taken the road ‘less traveled by, and that has made all the difference.’”
—Chris Matthews, host of MSNBC’s “Hardball” and NBC’s “The Chris Matthews Show”

“Jared Cohen has written a unique book. Imagine a young American circulating in the back alleys and cafes of Iran, Lebanon, Syria, Palestinian refugee camps, and Iraq meeting other youth on their terms and asking pointed questions about their aspirations, concerns and attitudes toward their rulers and toward the United States. There are breathtaking descriptions of flirting with danger and fascinating dialogues that provide deep insights into the politics and sociology of four key countries in the Middle East. It is a fascinating read which I recommend to anyone who wants to develop a better understanding of the Middle East and Arab world.”
—Frank Carlucci, former Secretary of Defense

“In this remarkable book Cohen provides a fresh perspective on the Middle East. Seen through the eyes of the youth, and poignantly describing their hopes and despairs, Cohen provides a timely commentary on the troubled relations between America and the Middle East. Looking at the youth across the cultural divide as well as the politics that divides them, this book provides much food for thought for Americans and Middle Easterners alike.”
—Vali Nasr, author of The Shia Revival: How Conflicts within Islam will Shape the Future

“In this engrossing book, Cohen artfully combines his natural confidence and flair as a writer to produce a revealing look at the youth of Iran, Lebanon, Palestine, Syria and Iraq. Riveting from start to finish.”
—Kirkus starred review

“Cohen’s accounts are sharp and his intentions admirable.”
—Publishers Weekly

Classrooms were never sufficient for Jared Cohen; he wanted to learn about global affairs by witnessing them firsthand. While studying on a Rhodes Scholarship at Oxford, he took a crash course in Arabic, read voraciously on the history and culture of the Middle East, and in 2004 he embarked on the first of a series of incredible journeys to the Middle East. In an effort to try to understand the spread of radical Islamist violence, he focused his research on Muslim youth. The result is Children of Jihad, a portrait of paradox that probes much deeper than any journalist or pundit ever could.

Written with candor and featuring dozens of eye-opening anecdotes, Cohen’s account begins in Lebanon, where he interviews Hezbollah members at, of all places, a McDonald’s. In Iran, he defies government threats and sneaks into underground parties, where bootleg liquor, Western music, and the Internet are all easy to access. His risky itinerary also takes him to a Palestinian refugee camp in southern Lebanon, borderlands in Syria, the insurgency hotbed of Mosul, and other frontline locales. At each turn, he observes a culture at an uncanny crossroads: Bedouin shepherds with satellite dishes to provide Western TV shows, young women wearing garish makeup despite religious mandates, teenagers sending secret text messages and arranging illicit trysts. Gripping and daring, Children of Jihad shows us the future through the eyes of those who are shaping it.

After completing this book, Jared Cohen joined the U.S. Department of State. A Stanford graduate (2004), Oxford graduate (2006), and Rhodes scholar, he has conducted extensive research in Iran, Iraq, Syria, and Lebanon. He has also traveled to Afghanistan, as well as 21 African countries. He has worked in the public and private sectors and appeared in the media, including ABC Radio and the Discovery Channel. Jared is now CEO of Jigsaw at Google. He lives in New York. 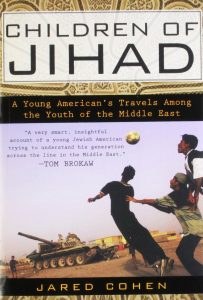